All of the things!

Seems like I have been leaving things a little lax on the update front, and that is because all of the things have happened recently, in the last month or so since I last updated.

Usually I prefer video updates, but there have been too many things to video.

Megan arrived from the UK

We prepared to go sailing

We began our sailing adventure!

Preparation for sailing was an amazing task, and had we not had a car would have been impossible. The amount of things that need to be located, purchased and moved from place to place was staggering. We had to beach, scrape and antifoul Esprit between tides. We had to purchase all of the gear we would need, waterproof bags, water containers, cutlery, fridge, spare battery etcetera. We stopped short of buying another solar panel because we have nowhere to fit it permanently. On top of the boat (3000), the dinghy (400) and the engines (1400) we had to get another sail (300) a fridge and battery (1000), water containers (100), anchor, antifoul, waterproof bags, ladder, drill, depth sounder, fishing rods, kitchenware (800) and probably a bunch more stuff we can’t remember right now but use on a daily basis.

So the preparation for sailing concluded with us, at the end of the lease on our accommodation, emptying our room either into Esprit or into storage and moving full time onboard. We are now homeless vagrants. It is much nicer than it sounds!

Our first attempt to get out of Auckland had us tacking into the wind and waves for four hours until we were within reach of the mouth of the harbour when a rogue wave jostled our dinghy free from the deck. As it had been recently repaired I was waiting to reinflate the dinghy, little did I realise that I had also left the valves open, so I was hauling it in and wondering why it was so heavy. Turns out it had begun to fill with water…luckily I got it onboard when I did! This is a rather benign account of what was a rather stressful incident and saw us motoring back to the calm waters on the far side of the Harbour Bridge and going for a swim instead.

Our second attempt the day after was a success however, and since then we have been to Rangitoto and Oneroa Bay, where we are presently stocking up and considering our next options. The swimming is good and the weather is lovely!

Esprit is the little boat just above the tree.

So I worked up the courage to get the main sail out and give it a whirl. There were several things that stopped me doing this beforehand.

Firstly I wanted to get the hang of using the fore sail, tacking, gybing and getting used to the angles and trimming possibilities.

Secondly, when the boat heeled it would frighten me. I knew that the boat wouldn’t just tip over, but that didn’t stop it feeling like WAS going to tip over. I needed some time to get used to it.

Little did I realise until after using the main that all my issues would be solved.

I was having problems sailing to windward, the main sail fixes that making it a breeze to get decent speed when close hauled with minimum fuss. With a genoa alone the helm required was significant and was a bit of a fight.

I was having trouble getting the speed required for tacking in light airs. The main sail gives me that speed, and the jib can just be used for manouverability.

I was haivng trouble getting my hands free from the tiller to adjust the genoa’s sheets because Esprit would just head up into the wind immediately. The mainsail balances the helm wonderfully so I can tinker here and there.

All in all using the main sail is the best idea I had yet and after a bit more research I am confident that I can pilot Esprit safely even in moderate seas. The main is held to the runners in some cases by cable ties, true, and I am sailing with a permanent reef so there is no chance what-so-ever of me banging my head off the boom. This is a compromise I am more than happy with.

I may even replace the cable ties one day.

Here is the video! Under the harbour bridge and back. You can see the heel as I go upwind, and I kindly cut out the long boring tacks so the video is just one long, intense thrill ride. Hang on!

The bottom scrape that I managed was almost two months ago! Means Esprit is long overdue some attention in that department.

There was nothing serious, some small barnacles and whatnot, and I managed to eject the sea squirt that was clogging the toilets intake nozzle…more on that story later…

Yes! Laughter indeed! I traded in my serviceable yet inadequate kayak for an inflatable dinghy and engine!

Nothing huge, 2.4m hull and a 2.3hp motor, but it means I can now travel safely in rough weather and not fall in again, carry gear to and from Esprit, and ferry fishing companions across.

I can also hoon around for no reason at all.

Had a lovely sail this weekend! Very calm breeze, would have been perfect for a first try of the main sail but I got confused with it so left it for another day. Also getting better with my sailing knots.

A much more modest mission today! My housemate and I took to the waves for a two hour ride to little shoal bay.

The wind was low to moderate for the duration of the sail, picking up to be consistently moderate once we passed under the bridge for the second time. I failed one tack because the wind was not strong enough to take the bow through the wind, but it was fine, I just turned it into a gybe. Tacking back and forth across ‘regular’ Shoal Bay we got some reasonable lean, enough to make Sarwan exclaim. This was his first time sailing.

I had my usual ambient terror, which ebbed once the day went on.

You can see above my approximate route. It was rather a hectic day and I think I bit off a little more than I could chew, but damn it! I chewed none the less!

Started out pretty chill, blowing a low to moderate south westerly and I cruised slowly under the genoa alone all the way out to Rangitoto. It took probably about an hour and a half. That was when the fun started… It was around two o’clock and I thought getting on home might be a good idea, the wind had picked up and I was getting hungry.

I would like to mention at this point that until now I had only ever actually completed two manouvres, which were the failed tack into a gybe and the successful gybe shown in my first sailing video. I was terrified to say the least, but I am of the opinion that if something is scary that does not mean it should be avoided, instead it should be bested, if possible.

So I started a series of close reaches, tacking back and forth across the mouth of the Tamaki Straight. The boat was heeling at some points until the gunwhale was skimming the surface, and I was terrified, but it felt under control, and when the wind gusted too hard I would turn off the wind to de-power a bit. I realised after a while that I was not going to be able to point high enough to get a decent angle on the channel, and there was no way I was hoisting the main, but I persevered thinking that it didn’t matter if it took a while as I was learning a lot.

As I was approaching the star marked on the map a stronger than usual gust hit, and I tried to turn off only to have the boat wrenched down at the nose as the sails caught the full force of the wind. The prow nearly buried and there was an awful groaning. I was terrified, somehow even more terrified than my ambient level of terror. I loosed the sheets, pulled down the sail and jammed it into the anchor well. Then I turned on the motor and blasted head first into the force five wind and waves for the 40 minutes it took me to get home.

Once moored I ate an entire packed of chocolate chip cookies and drank some lovely warm tea. The sugar and warmth restored a bit of sanity, just in time for the winds to drop… Typical.

But now I know to turn INTO the wind to de-power.

Shit yo’ pants moments : 2 (one lasted the entire day, and one was rather acute)

Got her sailing for the first time yesterday. Only about a kilometer on total, but the trip was a massive learning experience even though it was so short.

My mission for last weekend was to antifoul Esprit to some extent. Seeing as she has bilge keels is was possible for me to stand her on a beach when the tide went out. I was not expecting the mass of creatures that were living in her unshaven butt beard! You think that is a disgustingly excessive comment?! Wait until you see the pictures! 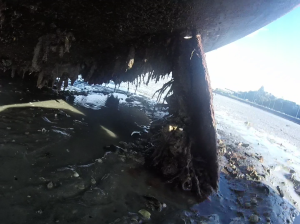 Yeah…it’s not so funny when you realise I was not exaggerating. It also explains why my fuel consumption was so high that I ran out of petrol and had to get a tow…

So some metal paint scrapers, a broom handle and about an hour later the collection of mussels, oysters, barnacles, sea squirts, sea weeds, crustaceans, anemones and filter feeding worns were drying out on the mud and Esprit had a rump to be at least semi proud of.

She is now rady to sail. Stand by for my first sailing video tomorrow!

And now for something completely different!

Goodness me! Four months since my last post! But it has been an eventful time, for example I am in the other hemisphere now, probably exactly opposite my last residence should I discover a manner of drilling and traveling safely through the centre of the earth.

There will be more videos, pictures, blogs, and art forthcoming now that my life has settled down once again. I have probably hours of video that I need to edit and many many new drawings and ideas that I need to communicate. For now I hope you enjoy this video of my recent acquisitions 🙂

(note: The people featured in this video are my friends and flatmates, and in no way represent my possessions or acquisitions. Slavery is bad people!)